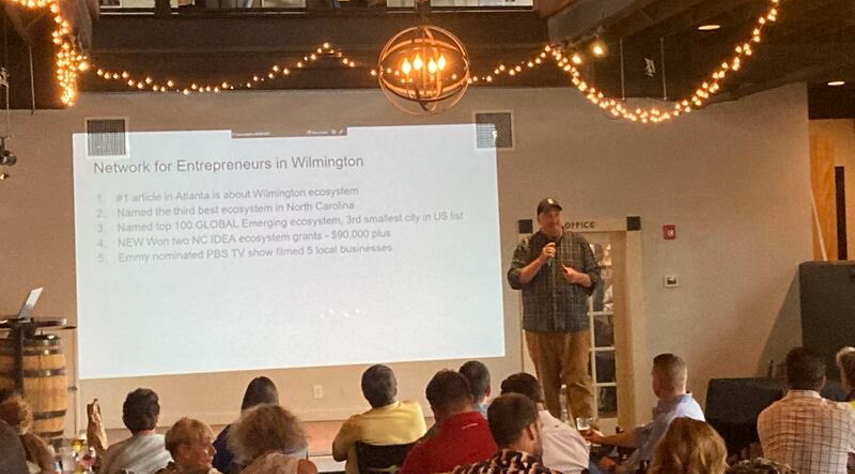 What’s up with Wilmington, NC? The small city with surprisingly strong startup roots.

only takes a few moments of scrolling through Twitter or browsing the news in 2021 to be hit with a slew of “moving out of SF”-type headlines.

As the pandemic made work from home — and work from anywhere — a reality for many industries, people have fled coastal tech-heavy cities like San Francisco, New York, and Los Angeles.

As cities vie for new talent, one national survey found smaller cities in Florida, Alabama, and Tennessee have attracted the most transplants over the course of the last year.

Those already familiar with the coastal town, nestled in southeast North Carolina between the Cape Fear River and the Atlantic, know the ocean, weather, low cost of living – and yes, the surfing — are natural perks for transplants.

But move beyond the beach and you will find an entrepreneurial scene growing on surprisingly fertile soil. The city has become a FinTech and banking hub over the past few years, sparking the growth of a new class of tech startup founders.

So how exactly did a town of about 130,000 become home to tech success stories ranging from nCino to untappd?

For locals, it’s a manifestation of the hard work put in over the last few decades.

And what will the influx of new people mean for the growing tech scene?

We spoke with veteran founders, up-and-comers, and investors to see how the small beach city is positioning itself to grow even more in 2021 and beyond.

ROOTS OF A FINTECH HUB

Most people you talk to will trace the roots of Wilmington’s modern entrepreneur scene back to 2005 with the launch of Live Oak Bank. Unlike traditional banks, they started hiring domain experts — like veterinarians, health care providers, and pharmacists — to navigate industry-specific loan deals.

Not only did this method grow Live Oak into the country’s most active small business loan lender, but it also helped establish Wilmington’s FinTech ecosystem.

Another Live Oak-backed venture, Apiture, launched in partnership with Atlanta-founded First Data back in 2017.

Since then Apiture’s API,  designed to improve the digital experience for banks and credit unions, has been used by over 400 different financial institutions.

Christopher Cox, COO of Apiture, told Hypepotamus that Live Oaks’ influence in Wilmington served as something of a tech incubator for the city, helping attract even more FinTech talent to help grow new banking-related digital solutions.

It’s no secret that startup cities grow faster with locally-based capital. Given the success of Live Oak and nCino, it doesn’t come as too much of a surprise to know that the city is also home to one of the largest FinTech-focused VC firms.

In its first year, Canapi has invested in 10 companies and joined Greenlight’s Series C round in the fall of 2020.

Hypepotamus spoke with Neil Underwood, co-founder of nCino and Partner at Canapi Ventures, who moved to Wilmington from Atlanta. He says that “recruiting is easier” now that the city has several FinTech success stories to its name.

While the city proved it can bring in and retain FinTech talent, others are investing in making the city inclusive and accessible for up-and-coming founders.

Genesis Block, the brainchild of husband and wife team Tracey Newkirk and Gerard Newkirk, is a hybrid coworking space and accelerator program.

“Small businesses are what build a culture for a community,” Tracey told Hypepotamus while giving a tour of their downtown loft office space.

Sponsored by Live Oak and Castle Branch, Genesis Block is working with startup founders, particularly those from minority backgrounds.

Gerard told Hypepotamus that Wilmington’s FinTech and banking connections make Genesis Block-backed startups some of the “lowest risk startups in the country.”

In a few months the team behind Genesis Block will also roll out ANZA, a tech aggregation platform to connect female and minority-owned businesses to anchor institutions and prime contractors for further growth opportunities.

While the burgeoning FinTech community has put Wilmington on the map, those outside of banking may be more familiar with untappd and its parent company Next Glass, a popular social app that allows beer enthusiasts to connect, share, and rate different beers.  In turn, breweries are able to upload digital beer menus to both engage with customers and analyze consumer trends.

With at least 16 breweries around the city, Wilmington is a natural birthplace for such an app. But beer not only helped put Wilmington’s tech startup scene on the map; it is also central to a new enterprise looking to end the city’s street violence.

TRU Colors, led by veteran entrepreneur George Taylor, previous chairman at untappd and current chairman at National Speed, is in the process of opening a hybrid brewery and educational space. By employing active gang members, TRU Colors hopes to set a national example of how to rebuild a community while fueling economic development. And if its beer gets people to sit down and have a meaningful conversation, so much the better.

You can read the origin story of the brewery and how it is working to curb gang violence here.

BIOTECH BEYOND THE RESEARCH TRIANGLE

Raleigh-Durham-Chapel Hill, commonly referred to as the Research Triangle, is known as a biopharma and biotech hub on the East Coast. But Wilmington’s tech scene has already launched several founders in the HealthTech field. You can read about a few of them here.

Several health-related startups got off the ground at the University of North Carolina at Wilmington’s Center for Innovation and Entrepreneurship (CIE), sports technology company SportGait and Lapetus Solutions.

Over 40 startups call CIE home at any given time, and university students can work with founders to help with app development, media, and marketing outreach. Other startups at the Center include VR training startup Jenson8. It also hosts the city’s 1 Million Cups series, an important networking and pitch event for new entrepreneurs.

The CIE and places like Genesis Block serve as physical gathering spots for the entrepreneurial energy growing in the city. As more potential tech talent moves in, it will be interesting to see what sort of founders walk through their doors next.

WHAT’S REALLY UP WITH WILMINGTON?

Having spaces for entrepreneurs to grow and connect is important to the infrastructure of any up-and-coming tech city. But those spaces are nothing without growth-focused individuals.

Walk into any of these spaces, or even into one of downtown Wilmington’s coffee shops, and you’ll find people energized to support the next chapter of Wilmington’s growth. One such person is Jim Roberts.

You’d be hard-pressed to find someone more connected in the North Carolina startup scene than Roberts. After serving as the Executive Director of the CIE, Roberts founded Wilmington Angels for Local Entrepreneurs (WALE) and Network for Entrepreneurs in Wilmington (NEW). NEW is a nonprofit Entrepreneur Support Organization sponsored by professional service providers like an accounting firm and concerned citizens who want to diversify the local economy and promote job creation through entrepreneurship.

While there’s no ‘magic formula’ for building a tech ecosystem, having a strong talent pool and a savvy group of investors are important components. Spend a moment talking to the growing list of founders and investors in the area and it’s clear Wilmington has both.

And adding a beach to that formula can’t hurt.

Two unique storylines are converging in Wilmington, making it a unique time to follow the city’s tech scene. As nCino’s and Live Oak’s existing employee pool combines with the growing number of new transplants drawn to the beach and the city’s unique charm, Wilmington is ripe to build even more tech-focused endeavors.

As tech giants flee SF and New York, you may just see them taking meetings or coding from Wrightsville Beach next.

Sorry, the comment form is closed at this time.

Who Is The Next Big Startup In Wilmington?

Tough Love for the Entrepreneurs Can Hack the Complacent Startup Ecosystem